Signs, signs, everywhere a sign, blocking up the scenery, breaking my mind

The weekend of the 11th I made a trek down to Lake Charles, Louisiana to join in the fun helping my friend Shelley paint her mom’s house. Last year’s hurricanes did a number on the place, so all of the carpet was ripped out and the walls needed to be cleaned up and painted. Since Shelley’s such a rad chica, a whole crew of us were more than happy to show up and pitch in.

Seriously, it was worth the trip just for the food, though. The place was full of food and we stuffed ourselves accordingly. Cake, donuts, pot roast, pasta, ice cream with Magic Shell … and best of all, Shelley’s mom made Lumpia (Filipino Egg Rolls) that were absolutely out of this world. Shelley’s boyfriend Aneil and I may have eaten somewhere in the neighborhood of 300 of the things. It was our duty though: Shelley gave up fried food for Lent (foolish girl!) and Amee’s a vegetarian, so it was up to the two of us boys. Fortunately we were able to come through in the clutch, and a crisis of surplus was averted. (It was a big sacrifice, I tell you.)

Anyway, the purpose of the visit wasn’t the food. Like I said, it was the painting, and now nearly every room in the Ewing house is a nice minty green color. (Though the place smells of vanilla thanks to some added extract … a neat idea to cover up the paint funk smell.) With a crew of 6 people the painting is actually kinda fun since it goes really fast. And the spackling became like a game of whack-a-mole.

Here are a couple of pics Shelley took of Paintapalooza 2006: 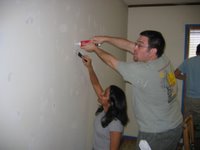 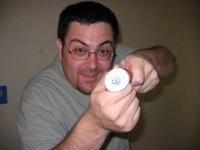 On the way back I took the scenic route through Lufkin and Palestine rather than driving through the Houston/Conroe area. Hey, it beat the heck out of dealing with traffic on I-45.

Off the beaten path you could get a much better idea for how last year’s hurricanes had affected the area. In places like DeQuincy most of the houses (that were still occupied) still have blue tarps for roofs. Really the only cleanup that you can see so far is that the major roads have been cleared. Progress is obviously painstakingly slow. But don’t just take my word for it. Here’s a sign I saw on the side of the road: Seriously though, look at the damage the wind did to this sign. The long-side of the sign was parallel to the wind, yet the force was so strong it bent the arches sideways. That’s just unreal.

One observation I had while driving through the hurricane damaged areas of Beaumont and Lake Charles was that the McDonalds signs were always recognizeable. Even the ones that had no glass at all were obviously the famed “Golden Arches.” Meanwhile, all of the rectangular or circular signs of other establishments provided absolutely no value when the glass was shattered. I would be interested to see how much better the McDonalds in those areas recover compared to the other similar businesses — especially along the interstates.

Categories: From the hip