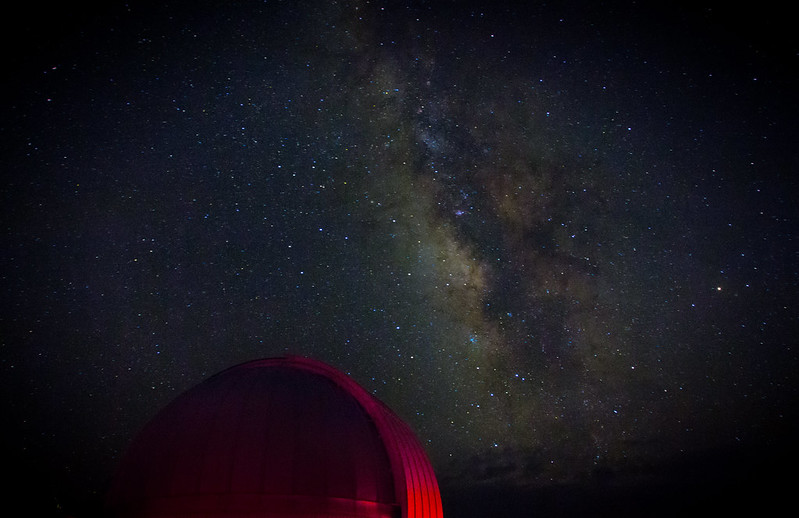 View this one BIG. 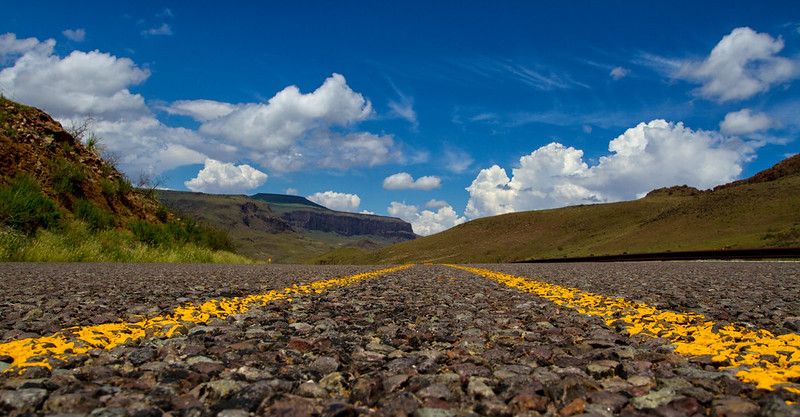 See this one BIG. "And who are you?" she sternly spoke to the voice beneath the smoke., a photo by sidehike on Flickr. These adirondack chairs were just outside the window of the office I was working in all week. 72F and breezy the whole time. You wouldn’t believe the restraint I needed to keep working. (View the bigger version on black)

I apologize for pretty much dropping off the face of the Earth the last couple of weeks. (Especially after promising to update more now that I had a good backlog of Nostalgia Tuesday photos to post.) My bad. Life’s just been way too busy recently. Here’s one thing I’ll tell you about, because I have pictures to help my brain-dead self tell the story. My friend Carol bought this 1973 Challenger a couple weeks ago from a farmer’s field up in Missouri. The car, which she named Ginger, wasn’t exactly in driveable condition (you may have noticed the duct tape “racing stripes” holding the hood down) so I finally gave Herman a good workout towing her back to Texas.

Everywhere we stopped (for gas, to pee, to reapply the duct tape) people would come out of the woodwork to gawk at the Challenger and ask questions. I snapped this picture just before the trucker from that red rig in the background jumped out and told us all about every project car he had in his garage back home. Tonight I needed to get out of the house.

So I threw the camera in the truck and headed west.

I eventually ended up in Mineral Wells.

I need to go back when I have the time to spend photographing this town "right." There’s a lot more to see.

Mineral Wells is an odd little town of about 15,000 people out in Palo Pinto county once famous for the "medicinal" powers of the many nearby mineral springs that gave the town its name. For example, water from the "Crazy Well" was said to be able to cure mental illness, among other maladies. I have heard people say that one of the minerals in the water in particularly elevated concentrations is lithium, so there may be something to that belief…

It’s hard to drive through the town without noticing this building. This is the Baker Hotel. Here’s what Wikipedia has to say about the place:

In 1926 construction began on the Baker Hotel, which would offer therapeutic baths and massages to the many visitors. Built in the style of the Arlington Hotel in Hot Springs, Arkansas, the Baker is not quite Art Deco, but still a product of the Roaring 20s. Construction was completed in late 1929, and the Baker opened for business on November 22, 1929. [From Bo: Notice the bad timing — this was less than a month after the stock market crash at the beginning of the Great Depression!]

The building has 14 stories (which puts it on the international list of skyscrapers), 452 rooms, two complete spas, and claimed to be the second U.S. hotel with a swimming pool and the first Olympic-size swimming pool in the United States.

The famous Big Bands of the era, such as the Dorsey Brothers, played the Sky Room at the top of the hotel or in the first floor Brazos Room. Lawrence Welk spoke of his times at the Baker early in his career. Guy Lombardo is another Big Band leader who also played the Baker. In addition to this, many celebrities stayed at The Baker including Welk, Judy Garland, Clark Gable, The Three Stooges, Roy Rogers, Dale Evans. A local legend also contends that Bonnie and Clyde stayed in the hotel one one occasion under an alias.

The building was in constant use from 1929 to 1963, including a three year period during World War II in which it served as military dependent quarters. The building sat vacant for two years until 1965, when a group of Mineral Wellians re-opened the Baker, but it would not last. The final guest checked out in 1972 and the Baker quickly began to deteriorate.

Supposedly the building is haunted. I especially like the story from TexasEscapes.com about the ghost on the 7th floor:

The stories of ghosts and hauntings began in the Baker long before it ever closed. A porter who worked there during the 1950’s and 1960’s was the first known to witness the ghost of the woman on the seventh floor. She was possibly the mistress of the hotel manager. Distraught from her affair she jumped to her death from the top of the building. The year of the incident has not been verified but the room she stayed in, apparently quite comfortably, was a suite on the southeast corner of the seventh floor. Many have reported smelling her perfume and her spirit is said to be quite flirtatious with men she may fancy.